Artificial Intelligence (AI) will revolutionize software testing, making it the most important technology to understand today. AI has already found its way into test automation tools, from AI-powered visual recognition and intelligence test recommendations, to risk profiling and bug hunting. At every step in the QA cycle, we see AI infusing itself to accelerate test creation, maintenance, and execution. This evolution has ignited a common question for many new to AI-infused technology and one I received, while hosting the webinar, “Artificial Intelligence for Faster and Smarter Software Testing.”

The difference between AI and a clever algorithm is how it is programmed. If you are an end user or a consumer, you interact with computer systems or technology at two points: 1/ The Start – where inputs are collected and entered into a system and 2/ The End – where outputs are produced as the results from a system. However, what happens in the middle is what matters most: The Journey. This journey is often untold by many programmers and engineers, making it difficult to distinguish between AI and algorithms. Three types of programmatic journeys can help classify a system using AI versus clever algorithms: 1/ Basic, 2/ Complex, and 3/ AI.

If a defined input leads to a defined output, then the system’s journey can be categorized as an algorithm. This program behavior or journey between the start and the end emulates the basic calculative ability behind formulaic decision-making.

If a system is able to come to a defined output based off a set of complex rules, calculations, or problem-solving operations, then that system’s journey can be categorized as a complex algorithm. Similar to a basic algorithm, this program behavior emulates the calculative ability behind formulaic, but more complex decision-making.

In an AI system, outputs are not defined, but designated based on complex mapping of user data that is then multiplied with each output. This program’s journey emulates the human ability to come to a decision based on collected information. The more an intelligent system can improve its output based on additional inputs, the more advanced the application of AI becomes. 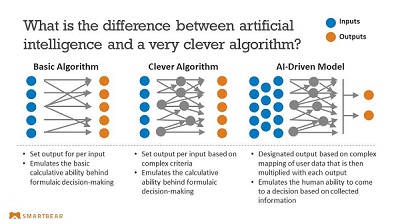 Popular use cases for AI include recognition-based mapping such as facial, speech, and object recognition. Recognition-based application such as facial mapping is a great example that highlights the capabilities of an AI-programmed system over algorithms. AI-driven facial recognition does not directly map the sequence of pixels from a face in a photo to a person’s name, but models are built that creates a mapping between an image and an individual’s name. The mapping in a machine learning program acts as a matrix and when multiplied with more user data from prior outputs, the matrix is able to better identify the correct persona based on stronger classifications and probabilities.

When computer systems start performing tasks that require human intelligence such as speech and object recognition or decision-making, products and services start to become vulnerable to the consequences of undefined use cases. AI is as good as the data it is trained on and without humans advocating for the voice of every type of customer, technology will not be able to avoid biased, black-box algorithms or account for niche use cases that have a broader cultural and global impact. For example, when loved ones inquired about survivors after a 6.9 magnitude earthquake in Indonesia, they received celebratory balloons and confetti in Facebook messages because the word “selamat” means both “congrats” and “to survive.”

Humans and machines must work together to build humanized technology grounded by diverse socio-economic backgrounds, cultures, and perspectives. Organizations wanting to stay relevant will start building diverse product teams that marry liberal arts such as linguistics and poets with STEM-focused studies to drive emotional intelligence in AI and advocate for humanized technology. In addition to an increase in liberal art fields found in technology-driven teams, diversity will originate from many different areas and define an AI’s ability to be successful in today’s volatile and complex world.

Akshita Deora Puram is a product development and marketing enthusiast and an evangelist in digital transformation. She manages the software testing portfolio at SmartBear.  Akshita has over 10 years in the software technology industry working as a system architect, tester, and IT consultant. She has an MBA from MIT Sloan and has also been widely published.

How to Avoid the Potential Dangers of AI, Robots and Big Tech Companies

Ways to massively fail with machine learning, and how to succeed